The council of rookies around the table at Cochrane Town Hall are settling in to their new roles, and preparing to tackle the 2019 budget after the holidays.

Mayor Denis Clement says the biggest issue hanging over council right now is the court case concerning a possible recount.  Previous mayor Peter Politis is asking that the ballots for the mayor’s race be counted again.  He lost by five votes to Mayor Clement. 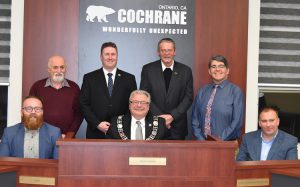 “Other than that, “ remarks Clement, “I think the challenge will be as in every community, it’s the budgets.  And that’s coming up in January, so it’s on the horizon for sure.”

He adds that the task at hand is clear.

“Trying to certainly balance the books as much as we can without any increase or very little increase in taxation.  That’s the challenge and to continue building towards building our infrastructure.”

The all-rookie council has been busy with orientation sessions, which the mayor says are almost over.