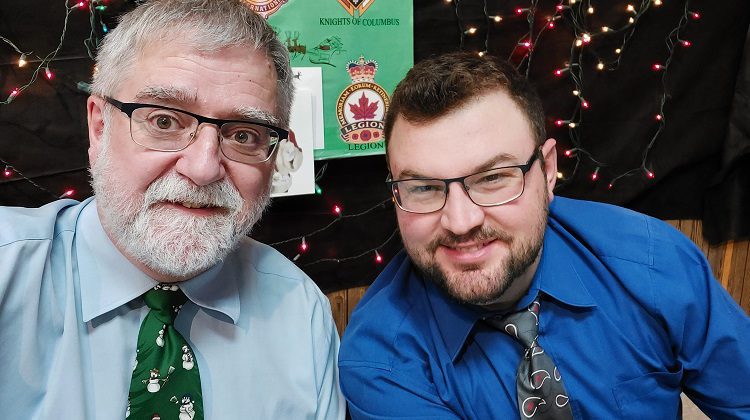 Moose 101.1 News Director Bob McIntyre (left) co-hosted the Bill Harkins-Eugene Richard Telethon with Jamy Bernier for the third consecutive year. It was the second year that it was a livestream, with hopes of moving back into the Iroquois Falls Community Auditorium for next year's 40th annual telethon. (Bob McIntyre, MyCochraneNow.com staff)

A good Christmas for needy families in Iroquois Falls has been assured by the 39th annual telethon for the Bill Harkins-Eugene Ricard Santa Claus Fund.

“We’re overwhelmed with the generosity and the support that we’re getting from the community and the community at large,” he told My Cochrane Now Dot Com, “because we’ve got – let’s see now – somebody from Australia, supporters, so we do have a worldwide audience.”

The pot was sitting at just over $15,000 when the show ended after about four-and-a-half hours, from pledges called in. Charlebois says that’s not the end of it.

“Last year, for about two weeks after that, we kept updating the figures almost every other day, and the numbers kept going up and up and up and we couldn’t believe it, but there it was.”

All the money goes to food and clothing vouchers for needy Iroquois Falls families. Charlebois says any surplus is kept in the bank for a rainy day.