The history of the OPP in Cochrane

This photo of the new OPP detachment was in the Northland Post in July, 1975. (Cochrane Public Library Archives)

As we look at Cochrane history this week, we learn that the Ontario Provincial Police have had a presence here since the first year Cochrane officially existed.

“The detachment was established on June 30th, 1910,” she says. “The records do not indicate the exact location of the detachment, but it was lost during the fire of 1911.”

The current detachment building was opened in July, 1975. Proulx-Chedore reads from the Northland Post of July 10th that year, and a report about the upcoming official opening that week.  Cochrane North MPP Rene Brunelle and OPP Commisioner Harold Graham were on the guest list.

“Other officials from the OPP plus the Mayor, Maurice Hotte will be on hand for the ceremonies which begin at 11:00am,” she reads. “The general public is welcome to attend, and tours of the facilities on Third Ave. will follow the opening of the building. Police equipment will be on view to the public.”

Cochrane history comes alive in the archives at the public library. 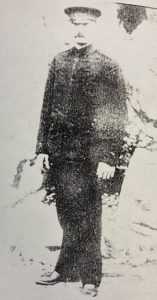