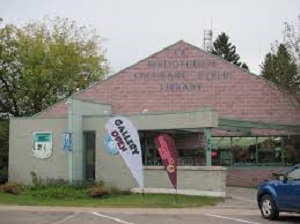 Local history now, and as the property tax rate in Cochrane was hitting an all-time high in 1967, the pinch was on.

The front page of the Northland Post on March 30th had an account of all of that, including a disaster staring at the Cochrane Public Library.

Archivist Ardis Proulx-Chedore from today’s library has a section of it.

“Board chairman H.A. Wills told the council that the 1967 provincial grant forms had not yet been received. The board had prepared its estimates as completely as it could until the grant calculations could be made, but council needed the figures that night.”

Wills also indicated that the provincial body governing libraries already forecasted a cut to its allocation.  The Cochrane library could expect its grant to be cut from the 1966 level of $4,500 to possibly as low as $3,000.

“Squeezed hard for funds itself, council could not undertake to make up a loss of this size, but did promise to give what help it could,” Proulx-Chedore reads from the article.

Fortunately, the library survived, thrived and grew into the institution it is today.  It’s also a great place to research local history, with its extensive archives.