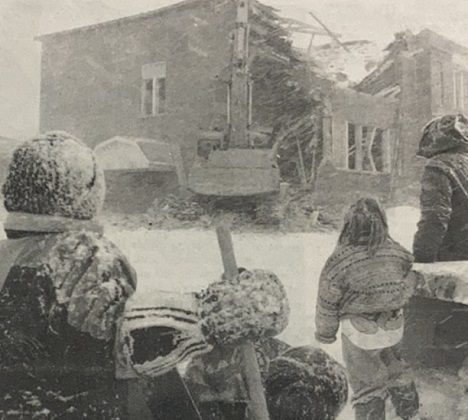 This week’s backward glance at Cochrane history takes us to 1994. On the front page of the Cochrane Times on March 19th was a story about Public Utilities Commission chairman Ken Rochon announcing that the town would have the service by the end of that year.

Cochrane Public Library archivist Ardis Proulx-Chedore reads an excerpt dealing with where the equipment for it would be.

“To reduce costs, the cell site will be located at the new water tower, so the PUC will not have the cost of renting a facility for it.”

“The Cochrane cell should be able to reach from the 10-Mile Corner, Fletcher’s Lake over to Silver Queen, to the New Post Reserve and ten miles out the West Highway.”

Murray said tourists coming to Cochrane for the Polar Bear Express often asked if there was cell service.

That front page also features a photograph of a crowd of people watching the demolition of Aileen Wright Catholic School.

These and other gems of local history are waiting for you to discover at the library.