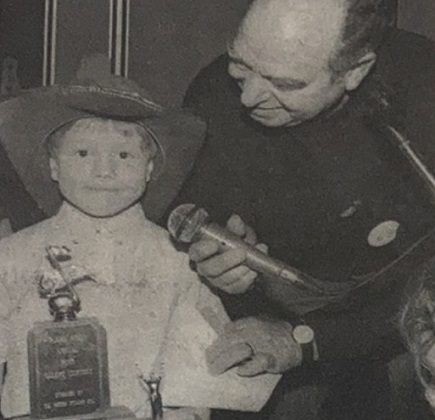 This week’s trip down Cochrane’s Memory Lane takes us back 27 years, to 1994, and a feature article in the Cochrane Times about Stompin’ Tommy Mann.

He started emulating Stompin’ Tom Connors the previous year, when he found a couple of albums of the Canadian icon.

As Cochrane Public Library archivist Ardis Proulx-Chedore reads from the article, Tommy and his friend Sara Belisle went to a Tom Connors concert in Matheson.

“Stompin’ Tom was so taken by the pair dancing to his music in the front row, he dedicated a whole set to Tommy and Sara. Tommy walked out of the concert with a tape and a personally autographed record album,” Proulx-Chedore recounts.

Tommy even brought his own board to his performances.

“’It’s so you won’t have to change the rug,’” adds Proulx-Chedore, quoting Mann. “‘Punk rock, heavy metal and rap is not music. They don’t know what good music is.’”

Stories of the people of Cochrane all the way back to 1910 are available in the archives at the Cochrane Public Library.  All you need is a library card.