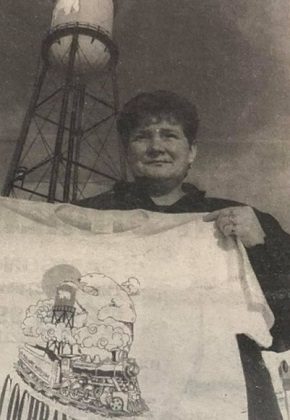 Two iconic landmarks in Cochrane are the topic for this week’s look at local history. First up is the old water tower that looked over the entire town.

Front page of the Cochrane Times on March 12th, 1995  has a story about an effort to keep town council from tearing it down .

As public library archivist Ardis Proulx-Chedore relates, The Old Water Tower Society wanted to build a 12-storey-high polar bear around it, as a downtown tourist attraction.

“’We’re trying to show them we can make a feasible project out of it,’ said Liette deBlois, the society’s spokesperson,” Proulx-Chedore reads from the article.

The bear’s scarf would have been an observation deck.

The same issue of the Times also had a story about Union Station being declared a historic site by the federal body responsible for such things.

“The designation came as a surprise to Mayor David Hughes,” says Proulx-Chedore.  “He noted that it was a federal initiative, yet the ONR is provincial. As such, he said, declaring the station a historic site required municipal direction.”

The Historical Sites and Monuments Board of Canada said the station’s architecture was a big factor.

Thousands of facts and artifacts from Cochrane history are housed in the archives department at the library.