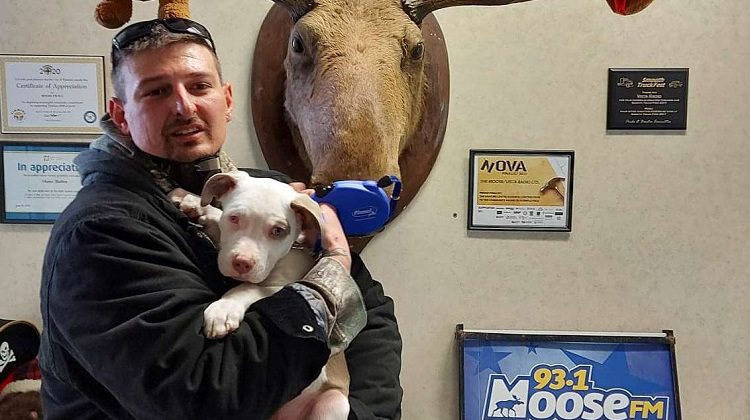 Nate Carroll dropped by Moose 93.1 in Timmins on Friday with Bandit, the pit bull pup he rescued in North Bay on Sunday. They picked up some cash dropped off at the radio station to help pay Bandit’s expenses. Coincidentally, Carroll’s friends call him “Moose”. (Bob McIntyre, MyCochraneNow.com staff)

It turns out that the two-month-old pit bull pup rescued from a hit-and-run car crash last Sunday in North Bay is named Bandit. He was brought to Timmins by Nate Carroll, who rescued him when the two occupants of the car took off.

Bandit has an injured eye, and Carroll had him at the vet’s today on Friday for the second time.

“They said that the medication that he’s on right now is slowly getting his eye to open up a little bit more, but they’re still concerned about the white that’s coming down in his eye,” he reports.

The gofundme account to cover expenses is going well, says Carroll, and he’ll return Bandit to his rightful owner in Burlington soon. “She’s a young lady, a new mom, so she’s having a hard time finding a way to get up here. So worst case scenario, we’ll bring him down next weekend.”

Carroll has been given the green light by police to return Bandit, saying the woman has proven that she does, indeed, own the pup.