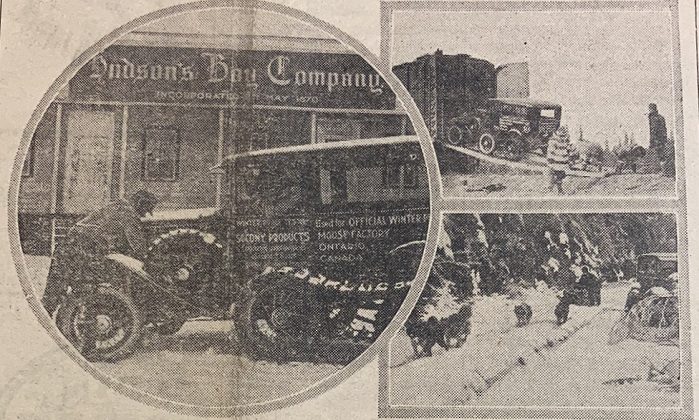 From the front page of the Northland Post, March 24, 1932, the car brought to the James Bay Coast for cold weather testing. (Cochrane Public Library Archives)

This week in our look back at Cochrane history, the front page of the Northland Post on March 24th, 1932.

The lead story was about town council approving a change in shopping hours.  Cochrane Public Library archivist Ardis Proulx-Chedore reads from it.

“The bylaw closing all wholesale and retail stores on Wednesday afternoon except hardware and drug stores was duly passed, after it was explained that the requisite proportion of each of the various classes of stores had signed the petition asking for the bylaw.”

That meeting was chaired by Councillor T.H. Carter, because Mayor Robert R. Mitchell was in Toronto on town business.

“Standard Oil Company of New York brought up by rail from Cochrane,” Proulx-Chedore reads, “a car equipped with tractor treads on the back and skis on the front for cold-weather testing.”

Also on the front page, news that the Iroquois Falls and District Motor Club was planning its annual meeting and banquet, “the one big event of the year to the motorists of this district.”

Your ticket to the archives at the Cochrane Public Library is your library card.