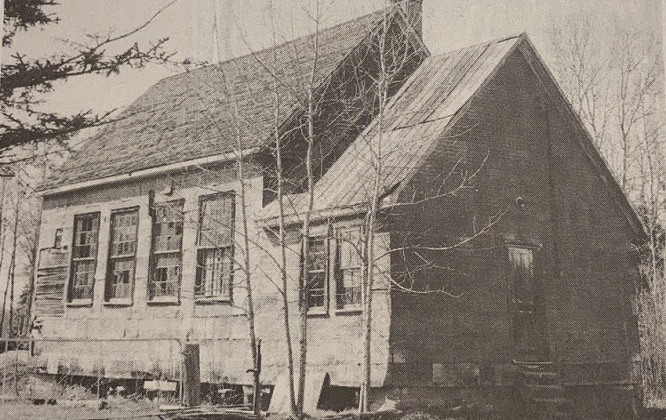 The Brower school that closed in 1966, as seen in 1998. (Cochrane Public Library Archives)

In the days before buses brought schoolkids into Cochrane on plowed roads, every rural community has its own elementary school.

For this week’s look back at area history, we focus on the Brower school, with Cochrane Public Library archivist Ardis Proulx-Chedore.

“The original building opened in the 1917-18 school year, and was replaced by a new one in 1960,” she says. “At first, only one of the two classrooms was used to teach Grades 1 to 6.  Grades 7 and 8 were bussed into Cochrane. The board tried to give the 35 or so pupils all the modern amenities.  A telephone, however, was not one of them, because service hadn’t made it to Brower yet.”

“The land for the first school was turned over for a dollar by Norman Brownlee, who was a member of the board along with George Young and John Armstrong. That was in 1913.”

It served Brower, Fox, Kennedy and Pyne Townships, which, at the time, were in the District of Nipissing and later Timiskaming, before the province created the District of Cochrane.