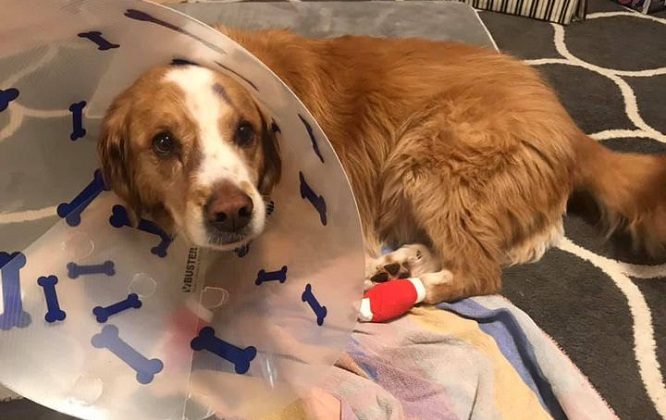 Rex with his paws bandaged, wearing a cone. (Jeff Frey/Facebook)

When the board of the Iroquois Falls Cross Country Ski Club meets this week, safety on its doggy trail will be among the discussion.

Rex, a ten-year-old beagle-retriever mix belonging to executive member Jeff Frey and his family suffered two nasty gashes on his left paws on Saturday. He had wandered off the trail, into an area with at least one discarded car and other metal scraps.

There was no veterinarian available in the Falls, and vets in Timmins wouldn’t take Rex because he’s not registered with them.  So Frey and his wife Margaret had to take Rex to Kapuskasing for two hours of surgery under general anesthetic.

“There’s still quite a bit of concern about this front paw,” says Frey, “because as a dog puts its pressure on there, it just naturally spreads open the toes there and we’re hoping that his sutures don’t come out.”

Frey says a major factor in the incident has to be the lack of snow this year.

“Most years, we have easily twice as much snow,” he notes. And usually, an occasional thaw causes a crust between layers of snow, which might protect an animal.

“We’re speculating at this point,” admits Frey.  “Some suggest it may be with barbed wire or something. We really don’t know.”

Rex is home, wearing bandages and a cone and enjoying all the extra belly rubs.

At that meeting this week, Frey predicts that someone will suggest making leashes mandatory on the doggy trail. But he says a leash removes control from a skier, with the dog pulling and going back and forth across the trail, so as a director of the club, he won’t support that idea.

Here is the complete interview with Jeff Frey: