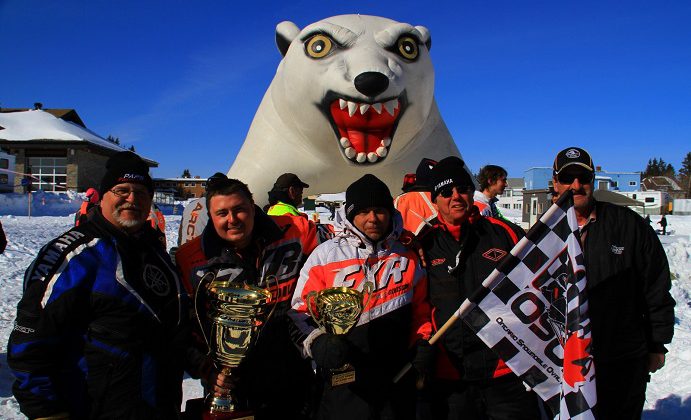 Some of the winners ath Polar Bear Cup, in front of the inflated polar bear seen at Cochrane Crunch hockey games. (Bill Murphy/Facebook)

The second annual Polar Bear Cup snowmobile oval races hit a few snowbanks on the way to the weekend event,but organizer Dan Girard says it was still a big success.

Girard, a member of the executive of the Vintage Riders club, says over 50 racers took part, up from 30 last year.

Despite the municipality shutting down the Commando Pavilion as a COVID-19 prevention measure, Girard and his committee soldiered on.

“Yes, it would have been great to be able to use the pavilion,” Girard remarks, “but Todd from Expedition Group of Companies provided an RV camper for the OSOR (Ontario Snowmobile Oval Racing) people to do their paperwork stuff and a huge tent for us to be inside to do awards.”

Girard notes that the crowd never exceeded the guideline of fewer than 250 people inside the tent.

“We were able to make do and the people from the south were great.  They understood that we had a few little setbacks. But we came back and wowed them anyway.”

Among the quintessential Cochrane features to the event was having racers enter the track on Sunday through the inflated polar bear usually reserved for Cochrane Crunch hockey games.