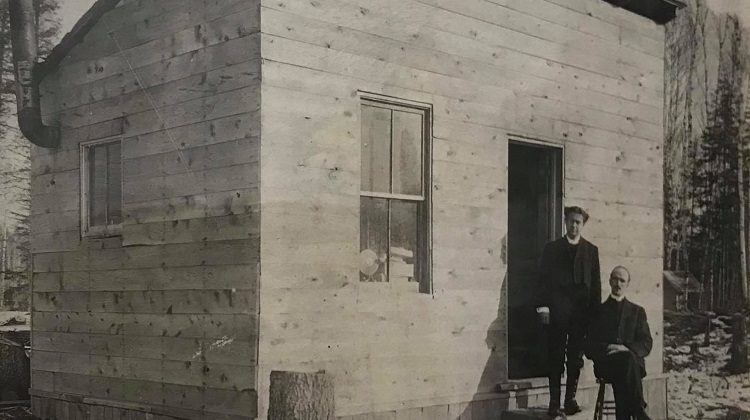 Rev. Archer Wallace and Rev. Peter Bryce, outside the first building in Cochrane "for religious purposes only" in 1909. It was built on Sixth Avenue, where St. Paul's United Church stands today. (Cochrane Public Library Archives)

As Northern Ontario opened up early in the 1900s, the province built a railway to connect with Sir Wilfrid Laurier’s transconinental line.  It was being installed across the northern wilderness. Cochrane would be the meeting point of the two.

Cochrane Public Library archivist Ardis Proulx-Chedore tells us that the name “Cochrane” was chosen even before the site for the town was finalized, next to Lake Commando.

In 1907, Premier Sir James Whitney sent a surveyor named Beaudry into the area,convinced that Cochrane would be a metropolis of the north.

“He thought a town at  the junction of the two important railways would be able to support a large population,” she says.  “He established a plan on a grand scale.  It showed four principal avenues: Third, Fourth, 5th and Sixth, each 35 metres wide.

Beaudry then got to work on where people would live.

“He also located the streets east of Lake Commando.  Beaudry laid out the streets for the residential community where everything would take place.”

You can explore in-depth history of Cochrane in the archive department at the library, any Friday between 12:00pm and 3:00pm.