Owl isn’t rare; spotting one in daylight is 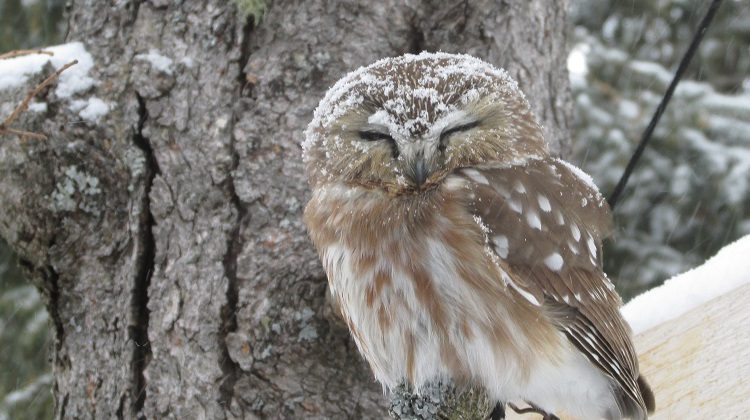 When Peter Davis took this photo of a Northern saw whet owl Tuesday morning, it was resting following a night of hunting for food. He first noticed it in his backyard in South Porcupine just before sunset on Monday. (Peter Davis)

The owl that retired MNRF wildlife biologist Peter Davis spotted in his South Porcupine backyard Monday night is not rare in this region.  What is rare is seeing one in broad daylight.  It’s usually only flying at night, hunting for food.

It was just before sunset Monday when Davis spotted the owl eyeing the ground under his bird feeders.

“Lo and behold, it was a Northern saw whet owl and just the way it was looking at the snow, ground level underneath the feeders, definitely made it look like it was in hunting mode,” says Davis.  “And deer mice are one of their preferred prey items.”

The deer mice feed on the bird seed on the ground under the feeders.

Davis notes that the Northern saw whet owl is one of nine species in our region.

“Most of them are here year-round as well,” he explains.  “So the Northern saw whet owl is one of those owls that’s  here year-round.  You don’t get to see them too often, though, because they are more of a nighttime hunter.”