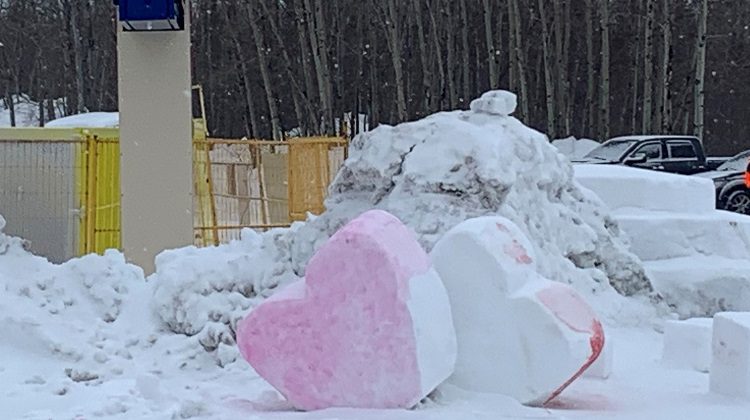 Down but not out. Staff at Brisson Castle Building Centre made a Valentine-themed snow sculpture this week. Ironically, it was snow -- a lot of it -- that collapsed the store roof almost a year ago. The target to have repairs complete and the store reopened is late May or Early June. (Tim Rout, MyCochraneNow.com staff)

If you feel like it’s been a year since the roof collapse at the Brisson Castle Building Centre in Cochrane, you’re close.

“The roof actually collapsed on February 26th of 2019, so we are two weeks away from being a full 12 months,” says manager Keven Robin.

The collapse at the Fifth Street was caused by about ten feet of snow.

“There’s quite a bit of finishing that has to be redone, so that’s going to take the majority of the time,” he outlines. “We also have to move our inventory back in, which is going to take another four to six weeks.” 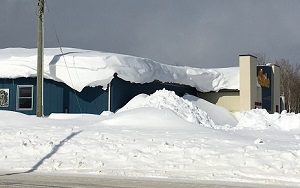 When you see in this file photo how much snow was on the roof of the Brisson Castle Building Centre last year, you understand how the roof collapsed.
(Tim Rout, MyCochraneNow.com staff)

The delay in getting construction started can be traced to two processes: engineering and insurance.

“It was a snow load issue is what it boils down to.  You’ve got to work through the complexities of the insurance claim process in order to be able to ensure the public is safe when they’re entering the store, as well as the staff is safe.”

Customers are still being served via the yard gates and sales office.  Staff gets merchandise for them from the warehouse. 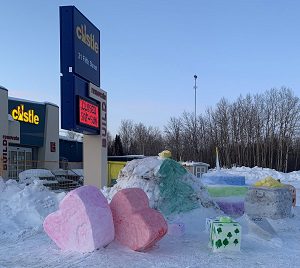