Teachers on a one-day strike at Cochrane High School make themselves comfortable on their picket line. (Tim Rout, MyCochraneNow.com staff)

Ontario education minister Stephen Lecce is on the minds of striking high school teachers in our region today. They want him and his ministry back at the table, to hammer out a fair contract.

Tammy Belanger-Lamothe is district VP of the OSSTF from Hearst to Temagami.  She notes that a mediator says the sides are so far apart, meeting makes no sense.

“The government is not interested in sitting down and actually negotiating right now,” she remarks. “So we need to show that we’re not willing to give up the future of education.” 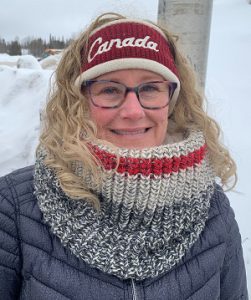 Belanger-Lamothe says last time the province and union were called to the table, the union waited until the midnight deadline, but the province didn’t show up.

She adds that Lecce should stop trashing the teachers in daily statements to reporters.

“I just wish he would quit grandstanding in the media with false information because it gives everybody the impression that we’re lying and that the union leaders are just lying to the members and it’s all about money and we’re being unreasonable when in fact it’s the total opposite.”