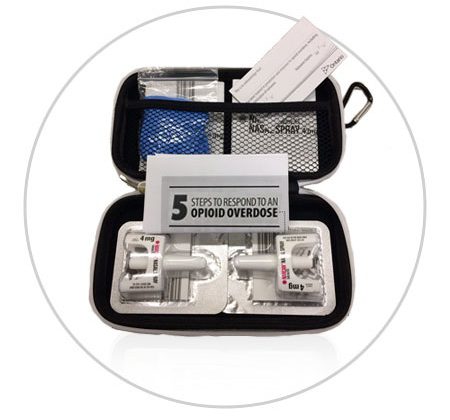 A typical naloxone kit, available free from the Porcupine Health Unit and most pharmacies. (ontario.ca)

The Porcupine Health Unit’s opioid task force is concerned about a spike in overdoses in recent weeks.

She says there are often peaks at certain times of the year.

“We know with holidays around the corner, people are gathering more together,” Leggett observes.  “There may be more times to celebrate. We were concerned specifically in November, but we do see peaks every one in a while in calls.”

She adds that it’s important to talk openly with family about the dangers of opioid use, and to prevent a user from being alone.

“We know that at this time of year, people who use substances may isolate themselves and it could be a very hard time for them. And that’s the one concern we’re having, is we’re seeing a lot of overdoses in homes where people are by themselves and don’t have that support and response from someone.”

That response could be administering naloxone.  It reverses the potentially fatal effects of an overdose, buying time to get the user to hospital.