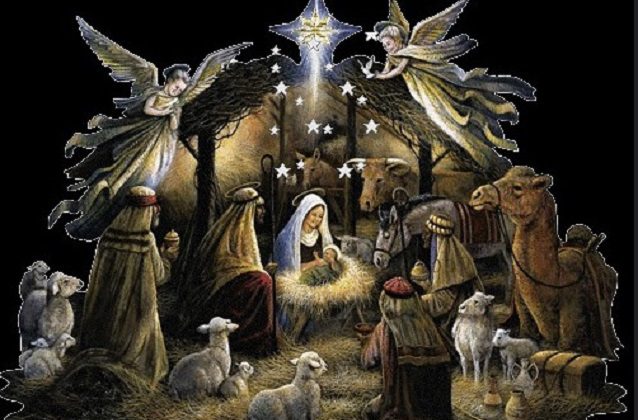 A live re-enactment of the Nativity is in its final rehearsals and almost ready to go Friday night.

“We have donkeys and sheep and a horse,” he tells My Cochrane Now Dot Com, “and we’re going to retell the story of the Nativity and so when Christ came to this Earth.”

Joseph and Mary are portrayed by Jameth Dagenais and Tatyana Blais.  Tousignant says they’re teenagers, adding to the realism.  He’s not sure that Joseph was very young, because he disappears from the Bible, “but we know that Mary would have been a young virgin, and so we know that she was in her teenage years.”

The pageant begins at 7:00pm, beside the Tim Horton Event Centre.  It will end about half an hour later with fireworks, not to be mistaken for the giant star in the east.

The big star is actually a sight to see, because have a big star on top,” the director states. “There will be flames coming out of it, so you don’t want to miss that.”

Tim Hortons has donated hot chocolate and donuts.  Admission is free, although you’re asked to bring a donation to the Cochrane Food Bank and/or the Northern Ontario Animal Welfare Society (NOAWS).