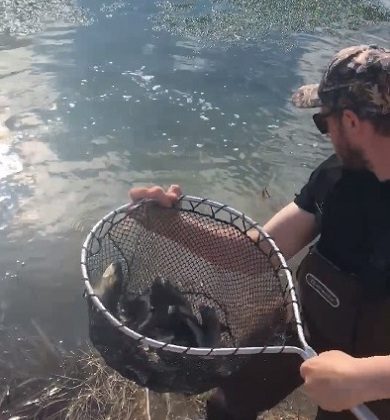 Fishing in Lake Commando has been more lucrative the past few months, and promises to be during any derbies this winter.

Cochrane Gamekeepers Club president Eric Mercier says the club has stocked the lake with about 500  speckled and rainbow trout.

He says since that was done in May. he’s been pleased to see more kids fishing.

“The MNR doesn’t put as much as they used to,” he explains, “so as a club we decided to try and promote fishing in one of the lakes that we have here in town, kind of the jewel of the town.”

Mercier adds that as the year wears on, the fish will grow and be more mealworthy.

“They have a fishing derby there in the winter and there was one in the spring which the Cochrane Crunch did and not a single trout was caught.  It was mostly perch that they got,” the president points out.