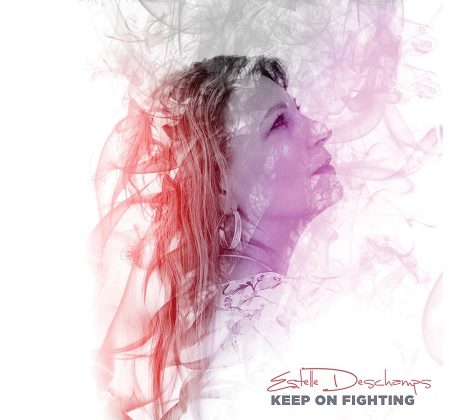 Cochrane singer-songwriter Estelle Deschamps is releasing her third CD, doing it in a way she hasn’t with her first two.  She’s holding a launch party next Saturday, November 23rd at the Legion.

“I’ll be doing a mix of my first and second CDs and I’ll do the whole album, the third one,” she says.

That newest one is called “Keep on Fighting”. Deschamps says the title song is about someone battling a serious disease, being told that people are rooting for them.

Deschamps writes all her own songs, gaining inspiration from her guitar player, John Lemieux of Smooth Rock Falls.  He’ll play a little riff, and she records it.

“I find a melody in those little riffs, and then once I’ve got the melody or just starting to write, I get the melody with it,” Deschamps explains. “It’s kind of weird.  I don’t play an instrument, but I have the melody in my head. That’s how I work.”

Like her CDs, the Saturday performance will be in both official languages.

“The first album, I have two French songs on it and then the second album is all in French and the third one is all English.”

The event at the Cochrane Legion starts at eight o’clock and runs for about two hours.  Deschamps says there’s no admission fee, and there’s a cash bar.

“I’ll have my CDs for sale, though.  I just want to share my songs, that’s all.”