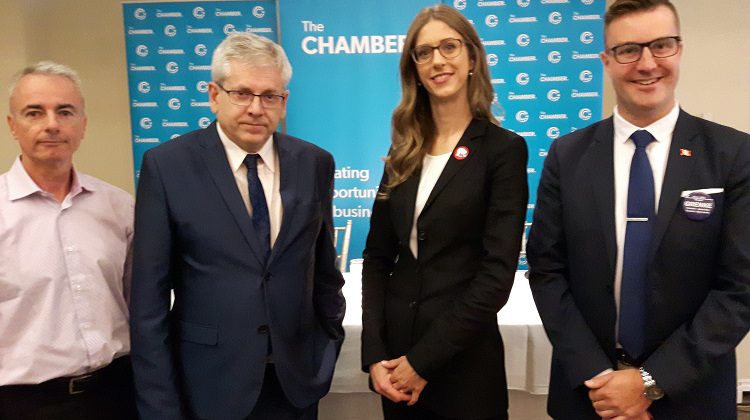 The atmosphere was polite with no attacking each other at a Timmins-James Bay election candidates’ lunch at the Dante Club in Timmins today.

Four of the five candidates took questions from Chamber of Commerce members.

Green Party hopeful Max Kennedy was the only no-show.

The incumbent — New Democrat Charlie Angus —  touted his record as an opposition MP in bringing money and programs to the riding.  And he had an election outcome prediction.

“My friends, this next parliament we’re going to have profound questions and I believe we may be in a minority situation,” he foresaw.  “You’re going to want someone who’s got the experience, someone who knows how to work across party lines to get things done.”

People’s Party candidate Renaud Roy pointed to the 27-billion dollars the government pays every year just for interest on the national debt, and asked the audience to imagine how that money could be used.

“Imagine the freedom to tackle some of the things that are dear to our hearts,” the rookie politician said.  “Make no mistake about it, debt is a form of bondage and it will dictate to us what we can do but especially what we cannot do.”

In her opening statement, Liberal Michelle Boileau said her vision is to attract research, innovation and more government investment to promote economic development in the riding.

“For me, it has nothing to do with partisanship,” the Timmins city councillor stated.  “It’s about meeting our needs now.  It’s about continuing my work with our communities.  So on October 21st, we have an important choice to make.  We can shoose the status quo or we can choose a seat at the table with a new voice for Timmins-James Bay.”

The status quo Boileau refers to is incumbent Angus.

Conservative hopeful Kraymr Grenke said the north has been left behind, and the riding needs a strong voice on the government side.