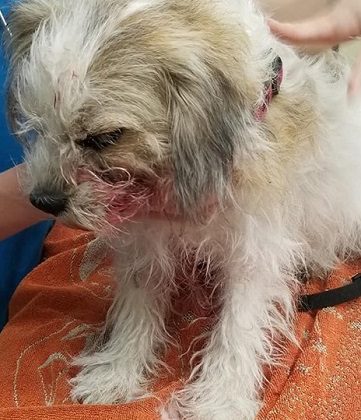 Serena Levert and Joe Pye's fox terrier, showing some of the injuries they say she suffered in an attack by two pitbulls. They credit Hard Rock Animal Hopital with saving this dog and their pug's lives. (Supplied by Serena Levert)

A Timmins woman is scared to go home to her Kirby Avenue apartment after she, her boyfriend and their two dogs were attacked on two separate occasions by their neighbour’s two pitbulls.

Joe Pye says he and his pug were attacked on June 21st .  He suffered 13 puncture wounds. The dog had bruised hips and eight punctures.

Then, he says,  last Thursday the pitbulls forced their way into their apartment as his girlfriend, Serena Levert, went to take their dogs outside.  Levert suffered bites and scratches, and their fox terrier’s chest was ripped open

“Now, my girlfriend has not been home with the two dogs since Thursday night,” Pye says, “because she’s just terrified and I don’t blame her.”

Pye says his lawyer, landlord and everyone right up to Premier Doug Ford’s office are saying their hands are tied, and there’s nothing that can be done.

“I don’t blame the breed.  I blame the owner for making these dogs vicious,” he comments. “I was the third attack, my girlfriend was the fourth attack that I know of.  These dogs should be put down and this owner should not even be allowed to own a goldfish.”