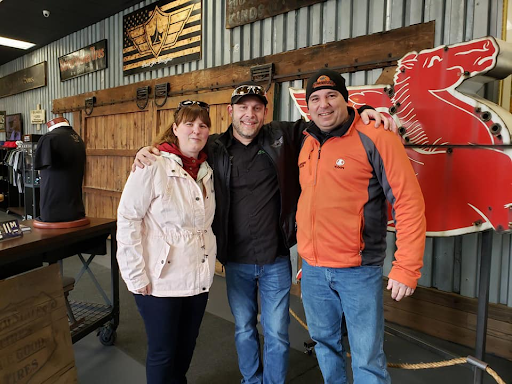 Nicole Blais (left) and Jody Blais (right) in a photo posted to Facebook by Charlene Blais.

The army and OPP are now joining the ground search according to a family friend.

Gilbert Mondoux, a business partner and friend of Jody Blais, has recently updated over his Facebook that his search is being aided by both services.

Mondoux also stated on the post that the most recent GPS coordination that they had been given was officially declared correct, which he says is good news.

He also goes on to thank everyone whether they have searched in person or simply helped to keep pushing the rescue team forward in their work.

Mondoux then goes on to thank the rescue team members as well as the army and OPP for joining the ground search and says this will be his last post, albeit he then says that he will try to post an update later this evening.

The search is still on for a missing pair from Kapuskasing and their helicopter.

It has been almost a week since Jody and Nicole Blais left Sudbury on a flight headed for a hangar in Fauquier, as of this morning, local search leader and friend of the family Gilbert Mondoux says they are now very close to the GPS reading that they believe to be coming from the Blais’ helicopter.

Mondoux says the visibility has been bad with the recent storm, and claims that they actually can hear the helicopter, but can’t see them yet.

He also goes on to thank local MP’s and MPP’s who have taken the time to reach out to him to help with the matter.

Today the search moves into its fifth day.

A missing local couple is still being searched for.

Following the organization of a search party that began in Timmins this morning, friend and business partner of Jody Blais, Gilbert Mondoux, has once again updated residents over his Facebook to say thank you to all volunteers who have come out to search this morning, as well as given people a look at the rough location that the search crews are currently searching.

Jody and Nicole Blais are presumed to have gone missing this past Monday one a return flight home to Fauquier from Sudbury, a flight which saw them take off around 7:00pm and never quite reach their intended destination.

When business partners of Jody and friends of the family such as Gilbert Mondoux and Pascal Fraser attempted to reach out to him and did not hear back, they alerted police and a search began Wednesday.

Since the OPP alongside the Joint Rescue Coordination Centre or JRCC and also the OPP Emergency Response Team are working the search and rescue operation, as well as snowmobilers on the ground who started their search today from Kamiskotia road this morning at 5:30am.

A GoFundMe page has been established to help the Blais family and the search effort with expenses.  Click here to get to it.