DO YOU REMEMBER WHEN ‘CHIMO’ WAS A SONG? 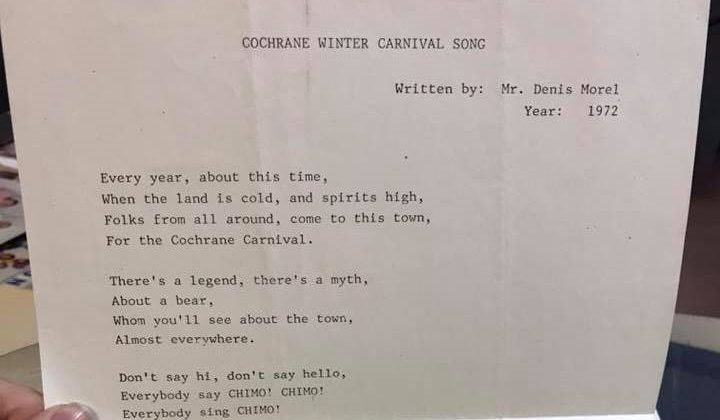 Some of the lyrics of the Denis Morel composition "Chimo" from 1972. Photo credit: Cochrane Ontario Past and Present/Facebook

Close to 50 years after it was written, a song that was the anthem of the Chimo Winter Carnival in Cochrane has re-surfaced on the Facebook page “Cochrane, Ontario Past and Present”.

It was written by Denis Morel, who grew up at the corner of Third Street and Thirteenth Avenue, and now lives in Elliot Lake.  He called the song “Chimo”, which is an Inuit greeting.

“When you meet somebody on the street, you would just say Chimo during the carnival time, instead of hello or whatever”, Morel recalls.  “So I decided to write a song on it.  It was back in 1972, I guess.”

The song caught on, and was sung by princess pageant contestants for a few years, backed by Morel’s band.

A lot of other people sang it, too, which was very satisfying to the songwriter.

“Absolutely, yeah. Once it got around and got popular, it was nice.  Yeah, it was really nice.”

The song faded in many memories after several years, until the carnival committee held a contest to adopt an official song, the winner of which is a totally different composition. Earlier this month, a photo of the original lyrics to “Chimo” surfaced up on the Facebook page “Cochrane, Ontario Past and Present”.

Here’s a recording of the song, courtesy Denis Morel.

Here’s the My Cochrane Now Dot Com interview for this story with Denis Morel.  At the end of the interview, he sings part of “Chimo”.