Residents “Take Back the Night”

Timmins took to the streets to end sexual violence.

This year marks the 25th annual Take Back the Night rally and march hosted by Timmins and Area Woman in Crisis to raise awareness and help stop sexual assault in the community. 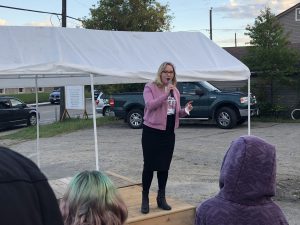 Public Educator on Sexual Violence Julie Lalonde says there were a lot of people standing up for the cause and she was excited to hear the chants and conversations. According to the Femicide Observatory one in three women in Ontario will experience sexual violence in their lifetime and 106 women and girls have been killed by men so far this year in Canada. Lalonde says for her it’s important that we situate that. “This is the same year that yeah we had MeToo conversations, but we also had the van attack in Toronto that was motivated by misogyny and so it’s about balancing the good and the bad.” She adds even in the context of MeToo, one in three women in this province will experience violence and “that should horrify all of us.”

Lalonde says every year has a great turn out to this event “but this feels like there is something really different happening in the air in terms of the MeToo movement, in terms of the fact that we are now making consent education controversial.” She states that “it’s a really timely time to talk about how we are having these conversations and it feels like progress, but are we actually moving anything forward.” 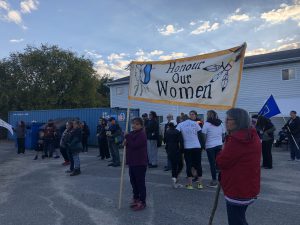 Lalonde says progress is being made because conversations are being had about the issue at all levels, but there is still so much more that needs to be done. Se says we have to get more men participating in these walks and standing up for the men who aren’t violent, instead of sitting back and thinking it’s not their problem.

Lalonde adds that Timmins always has a great youth turn out. “I live in Ottawa and there’s definitely more youth that come to this one than in Ottawa and I think that’s so incredible to think of the future generation of young women who aren’t just taking up space and really feeling entitled to walk down the street and have a voice.”

A Take Back the Night rally is also planned for the Iroquois Falls community tomorrow night at Jus Jordan Arena. Cochrane will be hosting one on Thursday at the Cochrane Smooth Rock Victim Services. 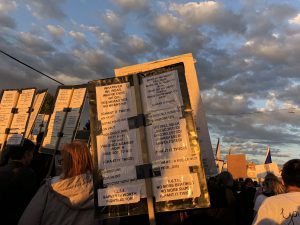